Richard Keaney first started making films while studying at University College Dublin from 2010-2013 where he made a number of student shorts. Soon after graduating, he founded Fight Back Films with fellow classmate and director, Natasha Waugh (IFTA nominee- ‘Terminal‘, 2016) and has gone on to direct multiple award winning short films including ‘Scope’ and ‘Late Arrivals’ ,the latter being selected to screen on Aer Lingus long haul flights in 2017.

‘GETTING IN’
(2020- Currently on Festival Circuit)

When his son is turned away from his favourite band’s gig for being underage, a father is committed to getting him in one way or another.

When a young man drops out of college to care for his shut-in mother he too finds himself increasingly insulated from the outside world, a factor which conflicts with his growing forays into amateur astronomy. 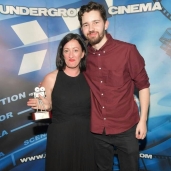 An Iranian Father and Son arrive at their new home in Dublin, Ireland. However, they are unable to confront the reason for their move and the effect of which threatens to drive them apart.

When Ryan’s girlfriend is brutally murdered he begins to psychologically unravel, falling into a dangerous criminal underworld where memories are skewed and he must ultimately question his own humanity.

Richard also worked as a Trainee Assistant Director on feature film, Soulsmith written & directed by Kevin Henry. The film was officially selected by Cork Film Festival, 2016, and won best world feature at Austin Revolution Film Festival. Soulsmith has also recently screened as part of the Irish Focus programme at the IFI (Irish Film Institute) in December, 2017 and is now available to buy or rent online. http://www.soulsmithfilm.ie/shop

SCOPE When a young man drops out of college to care for his shut-in mother he too finds himself increasingly insulated from the outside world, something which conflicts with his growing forays into amateur astronomy. CREDITS: Written, Directed & Edited … Continue reading →

Andrea Kelly has been awarded best actress at this years Underground Cinema Awards which took place on Saturday Night in Dun Laoghaire’s Royal Marine Hotel. The accolade was awarded to Andrea for her performance in short film, ‘Scope’ directed by … Continue reading →

After two years on the festival circuit, Terminal is now available to view on Vimeo.

We are absolutely delighted to announce that Scope’s world premiere will take place at the 2018 Chicago Irish Film Festival in March where it has been officially selected for competition. A massive thanks and congratulations to all cast and crew, … Continue reading →

We are thrilled to announce that Terminal has been nominated for an IFTA for Best Irish Short Film! We could not be more proud or excited. Thank you to IFTA for this amazing honour.

Ever wondered what goes into a the making of a short film?

Well, now is your chance. Check out our behind the scenes video from our short film Terminal, and see the cast and crew in action.